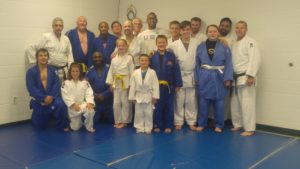 Classes are run parallel, or may be staggered, depending on attendance. Judo classes are open to ages 6 years and up (Male and Female).

Sensei Siegal started Judo in 1962 and competed collegiately in various tournaments throughout the East Coast. He also coached at the college level and joined the Greensboro Judo Club in 1995. Sensei Siegal holds a PH. D in Geology from the Penn State University.

Sensei Jones started Judo on Guam in 1969. While in the US Army, he practiced and competed in various places such as Guam, Germany and the United States.

Our courses are designed to introduce and teach you a combination of judo and jujitsu techniques. Included are break-falls, throwing, take downs, grappling, escapes,  plus chokes for 13+ and armbars for members 17+. This combined knowledge gives you the foundation and basic skills needed to Judo!!!